Branding and Our Brains

Good designers owe a lot to psychologists, and we’re going to use famous logos to prove it to you.

Gestalt is a psychological term referring to an organized whole that is perceived as more than the sum of its parts. That sounds pretty abstract, but it basically means our brains sometimes organize visual elements together to create a group. Psychologists in the 1920s created theories about what factors affect this process.

The 5 factors are similarity, continuation, closure, proximity and figure/ground. These psychological phenomena aren’t just theoretical, but they’re used by some of the biggest brands to create unforgettable branding. Here’s each of the principles demonstrated by some of today’s most famous logos:

Similarity describes how we categorize object that look similar as being part of a whole.

The Baskin Robbins logo demonstrates the principle of similarity twice. It’s our lucky day. Look at the lines in the center of the circle, above the company name. They’re actually just shapes, but we can see them in two different ways because of their similarities. First, we group the two shapes on the left together because they look like two different halves of the letter B. We group the two right shapes together and assume they’re supposed to create the letter R. Why do we do that when they’re just shapes? Because we recognize them as being parts of a letter we are familiar with.

But wait, there’s more. Because of similarities in color, we can also group the middle two shapes together, creating a group that can be seen as the number 31 (for Baskin Robbins’ delicious 31 flavors). This was no accident. Baskin Robbins used the pink color to trick you into also seeing the number 31, which just adds to the brand’s genius.

The principle of continuation theorizes that careful design can move our eye from one object to another. 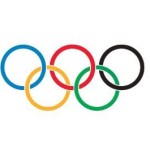 See how your eye moves from the blue ring to the yellow, red, green and black? That’s continuation. If the elements were not organized in a way that led your eye, you would not see it as one continuous group, but scattered circles.

See? Doesn’t make you think of the world’s greatest sporting event does it.

Closure means that our brains create an enclosed shape out of one that’s not completely enclosed. If it’s enclosed enough, our imagination will fill in the rest.

Okay okay, we see that the b in the middle of the circle also represents headphones. But wait, that’s not a circle. The large red shape is mostly round, but doesn’t completely enclose. This would be a circle:

Not as pretty, right? By leaving part of the circle open our minds are able to imagine simultaneously that the circle is complete and that the b extends beyond the circle.

Proximity describes how we group together elements that are close to each other.

IBM uses the principle of proximity to change otherwise meaningless lines into letters. This is what it’d look like if the lines weren’t close:

See? They’re just lines. Only when they are arranged closely enough for us to recognize the shapes do we perceive them as the letters IBM.

Figure/ground describes how your eyes and mind distinguish between what elements are the figure, and what is the background. Usually, when you see the words on this webpage, they are clearly perceived as the figure, and the white of the page is the ground.

This contrast is usually made by differences in color, shape or value.

The purple and orange letters of the FedEx logo are first perceived as the figure of the logo, and the surrounding white space the ground. But if you look between the second E and the x, you can see an arrow in the negative space. As soon as you identify the arrow as a figure, the orange color becomes the background. Our perceptions of figure/ground can change depending on what we can identify.

So there you have it. Marketers know how to work with our brains’ functionality without us even knowing it. Keep an eye out for more uses of Gestalt in your day-to-day life!